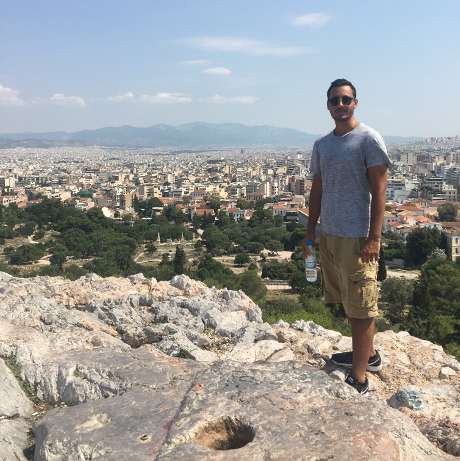 Yasin Bennane is a rising senior double-majoring in Middle Eastern Studies and Political Science, and minoring in Arabic. His primary interests are the global refugee crisis, the Western-Sahara conflict, and Middle Eastern and North African politics and culture. Through the Rutgers Global Advancement and International Affairs program, Yasin recently studied abroad in Greece, where he did volunteer work with refugees and migrants from many Middle Eastern countries. This fall, Yasin will be earning MES credit while doing an internship for the International Rescue Committee.

"For over three weeks, I had the honor and privilege of participating in a Rutgers study abroad service-learning program on the island of Leros, Greece with several other Rutgers University students. Throughout this initiative, I've volunteered with the Leros Solidarity Network at a PIKPA shelter working with refugees and migrants from several war-torn nations.

"Having studied the Syrian refugee crisis in several of my Middle Eastern Studies classes at Rutgers, I have had a profound understanding of this humanitarian crisis and the impact that it has had in shaping the region as a whole. Moreover, studying Arabic at Rutgers allowed me to utilize this skill in helping translate for the refugees on the ground for a variety of matters. It was one thing studying this crisis at Rutgers, and another becoming cognizant of the individual experiences that each refugee and migrant had to share about their journey.

"In a world so polarized of fear and ignorance, we must not forget that we are all humans and belong to the same single race. I have the most respect for these people and deeply admire their strength and determination. I have found the most genuine individuals and the best of friends among these people. It was truly the trip of a lifetime and it has shaped the way I view the world."