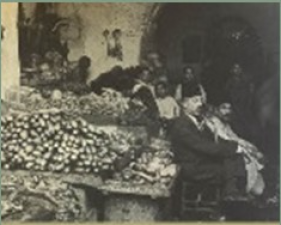 Scarcity and Economy in Mandate Palestine.

Sherene Seikaly is Assistant Professor of History at the University of California, Santa Barbara.  She is the editor fo the Arab Studies Journal, co-founder and co-editor of Jadaliyya e-zine, and an editor of Journal of Palestine Studies.  Seikaly's Men of Capital in Times of Scarcity: Economy in Palestine (Stamford University Press, 2016) explores how Plaestinian capitalists and British colonial officials used economy to shape territory, nationalism, the home and the body.  She has published in academic journals such as International Journal of Middle East Studies and Journal of Middle East Women's Studies as well as in online venues including Jadaliyya, Mada Masr, and 7iber.