The War Economy of the Fragmented Healthcare System in Syria
Wednesday, February 02, 2022, 10:30am

The War Economy of the Fragmented Healthcare System in Syria 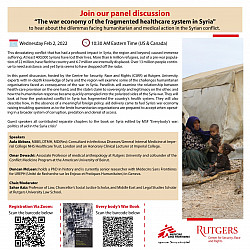 If you are interested in attending, please register in advance.

The devastating conflict that caused immense suffering in Syria is now over a decade old, but while the humanitarian and political crisis are far from over, international interest in Syria has been waning.

The panel discussion “The war economy of the fragmented healthcare system in Syria” intends to stimulate critical reflection and debate on the dilemmas facing humanitarian and medical action in the Syrian conflict.  The conflict has had a profound impact in Syria, the region and beyond. At least 400,000 Syrians have lost their lives. More than 6 million refugees, out of a pre-war population of 22 million, have fled the country and 6.7 million are internally displaced. Over 13 million people continue to need assistance, and yet Syria seems to have dropped off the radar. Experts with in-depth knowledge of Syria and the region will examine some of the challenges humanitarian organizations faced as consequence of the war in Syria. Panelists will examine the relationship between health-care provision on the one hand, and the state’s claim to sovereignty and legitimacy on the other, and how the humanitarian response became quickly entangled into the polarized sides of the Syria war. They will look at how the protracted conflict in Syria has fragmented the country’s health system. They will also describe how, in the absence of a meaningful foreign policy, aid delivery came to fuel Syria’s war economy raising troubling questions as to the limits humanitarian organizations are prepared to accept when operating in a broader system of corruption, predation and denial of access.

Omar Dewachi is Associate Professor of medical anthropology at Rutgers University and cofounder of the Conflict Medicine Program at the American University of Beirut. Trained as a physician and anthropologist, Dewachi’s work examines the social, medical, and environmental impacts of war on eve-ryday life. His award-winning book, Ungovernable Life: Mandatory Medicine and Statecraft in Iraq, is the first study documenting the untold story of the rise of state medicine in Iraq under colonial and postcolonial regimes of rule and the consequent unmaking of state infrastructure and the exodus of medical doctors and expertise under decades of US interventions and violence in the country. His forthcoming book manuscript When Wounds Travel chronicles close to ten years of ethnographic research and public health practice on the social ecologies of wounds and wounding, the rise of Multi-Drug Resistant Bacteria, and the reconfigurations of health care and humanitarian geographies across the East of the Mediterranean states. He is the author of numerous publications that have appeared in a number of medical, anthropological, and global health journals, including The Lancet. He has worked as an advisor to organizations, such as Médecins Sans Frontières (MSF) and International Committee of the Red Cross (ICRC), on medical and humanitarian matters in the Middle East.

Duncan McLean holds a PhD in history and is currently senior researcher with Médecins Sans Frontières for UREPH (Unité de Recherche sur les Enjeux et Pratiques Humanitaires) in Geneva. He has managed operations for MSF in both field and headquarters starting in 2002. Previously a lecturer in history at Charles University and the Anglo-American University, Prague, Duncan has also worked in policy, journalism, and history, writing and publishing in all three domains

Guest speakers all contributed separate chapters to the book on Syria edited by MSF “Everybody’s war: politics of aid in the Syria crisis”

For any questions, please contact Martine Adams, This email address is being protected from spambots. You need JavaScript enabled to view it.