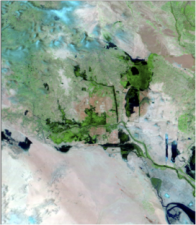 Bridget Guarasci is an Assistant Professor of Anthropology at Franklin and Marshall College writing a book about the wartime conservation of Iraq’s newly reflooded wetlands tentatively titled Warzone Ecologies: Restoring Iraq’s Marshes on the Battlegrounds of War. Guarasci’s work focuses on the ways in which environmental projects expand war as it is traditionally conceived, thereby mandating an analysis that takes into account broader ecologies of violence. You can find her work at MERIP, International Journal of Middle East Studies, Arab Studies Journal, and forthcoming in The Annual Review of Anthropology.

Ground Truth analyzes cartographic production of Iraq’s marshes in the Swiss remote sensing labs of the United Nations Environmental Programme (UNEP). The science of remote sensing produced real time maps of marshlands terrestrial groundcover from NASA satellite diagnostics that enabled scientists to evaluate how much of the newly reflooded marshes would regenerate and to what extent its vegetation could sustain ecological life. Unlike imperial mapping projects, which advanced and sustained British and French empires in the Middle East, UNEP Geneva lab-based adaptations of remote sensing to the 21st century Iraq war involved no ground verification, a process called “ground truthing.” These purely lab-based diagnostics created a virtual reality of the wetlands that UN scientists and Kubra’s organization relied on to develop Iraq’s conservation policy. I argue the process of producing the marshes as virtual space was a form of violence borne by Iraqi scientists who trained on the technology as they were pushed into increasing levels of territorial abstraction while the war demolished cultural landmarks, bridges, buildings, and markets that made the material geography of Baghdad.

This event is open to the public.   Advance registration is required.

Contact: This email address is being protected from spambots. You need JavaScript enabled to view it.