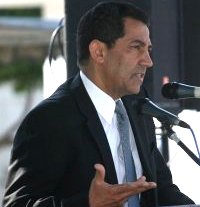 Hamid Abdeljaber joined the Center for Middle Eastern Studies (CMES) at Rutgers University as a lecturer on January 1st, 2007. He is currently teaching courses for CMES and the Political Science Department on Arab Media, Islam and Democracy, Contemporary Politics of the Middle East, Modern Arab Society, United Nations and the Middle East and the Arab-Israeli Conflict.  He is also a senior Consultant and Media Trainer at the Center for Development Communication (CDC), a Washington-based media training and developmental Center.

Prior to Rutgers University, Abdeljaber had been working for the United Nations (UN) for over 25 years. He was granted separation on October 1, 2006.

During his tenure with the United Nations, Abdeljaber worked in the Department of Public Information; he served as Chief of Middle East Radio Unit and News Center, as well as Liaison Officer with Arab Media. He also administered as a Press Officer, News Analyst, News Distribution Officer, Political Affairs Officer at the Office for Research and Collection of Information, Information Officer at the Office of the Spokesman for the Secretary-General, Spokesman for the UN Mission in Western Sahara, UN Spokesman in Pakistan and Afghanistan, and  a Spokesman for the late Special Representative of the Secretary-General in Iraq, Sergio Vieira de Mello, who was killed in Baghdad on August 19, 2009 together with 21 colleagues.

He also participated in numerous academic conferences and presented several papers in his capacity as a researcher. His research papers covered the conflict in Western Sahara, conflict in Iraq, Palestinian civil society, Humanitarian intervention, terrorism and the dilemma of definition, Islamophobia, UN and the new global challenges and many others. Some of the papers were published.

Mr. Abdeljaber is also a columnist; he frequently publishes a weekly article in major Arabic newspapers distributed in London, Tunisia and Jordan.